What would you find in a bottle of Jim Beam? Every answer to this question is two-fold: “Bourbon” and “maturing,” like no other bourbon on the market ages as long. That’s right, Jim Beam Black is a double-barreled blast of full-flavored bourbon — one of the smoothest bourbons you can get. It’s been aging for at least six years (in totes) and blended before being bottled or sent off to be bottled into its signature bottle.

Besides the fact that it is one of the most recognizable brands on the market, this Jim Beam has a distinctive appearance. It is marketed as a younger, livelier, and more affordable version of the venerable line. But is it really any good? Let’s find out together. 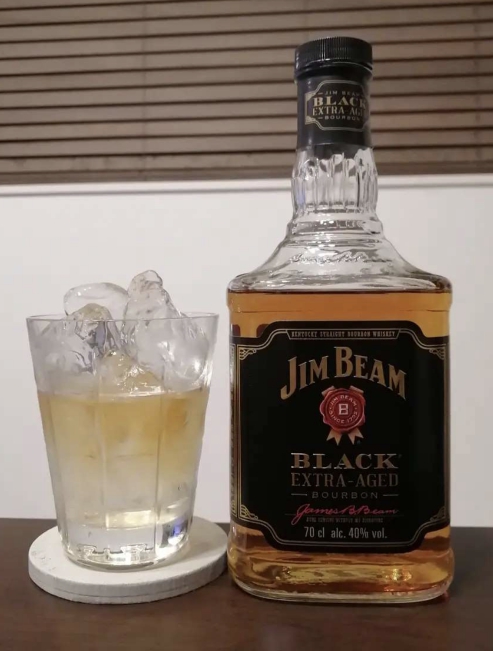 It has a significant deep gold color. As you pour it into the glass you can see it forms short tears slowly running down the inside of the glass, reflecting the light like a prism, which is really quite beautiful. And worth mentioning that the color in the glass looks richer than it does in its bottle.

Jim Beam Black Extra Aged (86 proof) opens with an enticing scent of vanilla custard and candied apple, followed by a hint of light oak. If you enjoy bourbon with a gentle kick, this one’s for you. On the nose, it feels like buttered popcorn, with a hint of artificial sweetness and ethanol. It bit with gentle spiciness and ended with black pepper and wood. One sniff and it’s clear there’s a hint of peanut shells. Not that peanut shells are strange but it certainly doesn’t seem to fit as well as other notes do. The wood is the strongest note and seems to overpower some of the more nuanced parts of this otherwise soft aroma.

JB Black Extra Aged is a very thin and delicate bourbon. It surprisingly doesn’t have that thick syrupy coating mouthfeel that most bourbons have. The flavors of Black are also very thin, with the first being raisins and the second the oak wood taste that comes during the middle and later parts of the tasting experience. Oak is the main character in this story of palate, bouquet, and taste. You’re not going to find much complexity here. It is a bourbon of average mouthfeel and flavor, with traditional tasting notes of vanilla, oak, and caramel. It’s still smooth enough to sip neat.

This is a short and simple aftertaste of vanilla, toffee, and wood spice. This bourbon has a dash of kick, but not much sting. Not a complex finish by any means, but your friends will enjoy it anyway. Its light finish makes it the perfect choice for enjoying an evening on the town, which was the intention when this was created. Its lighter flavor makes it more appealing than some of the other options on the market while still being strong enough to keep you warm through the upcoming winter months. Overall JB is a bourbon my friends and I enjoy with cocktails or simply by itself.

Whether you’re a bourbon aficionado or someone who’s just looking for a cheap bottle you can find anywhere to buy, there are quite a few options available on the market. To keep the list narrowed down and to help save your time, here is a short list specifically for Jim Beam Black Extra Aged.

Knob Creek is part of Jim Beam’s small batch bourbon series and it comes in at a respectable 60%. The main difference between Knob Creek and the standard Jim Beam offering is that the barrels are aged longer (ten years or more); they are then selected based on their flavor profile and bottled un-cut. This means that no water or sugar has been added to Knob Creek before it reaches your glass.

Visually it is deep amber, a bit darker than expected against the pale and crystal light they had us drinking it with. The nose jumps out of the glass armed to the teeth with wood, pepper, allspice, and cinnamon to fight for your attention. With just a trace of the nuttiness and mint that we’ll find later. It smells like caramelized popcorn…with hints of buttery-sweet corn, a touch of citrus and honey, and deeper still an underlying dark caramel note.

Knob Creek Single Barrel Reserve contains enough vanilla, wood, and nuttiness to complement the sweetness. The whiskey is a potent combination of caramel, honey, cinnamon, and allspice. The finish is long and lingering.

It’s the very popular Weller wheated bourbon, part of the Buffalo Trace Antique Collection, and has been around for a little over a decade. There may be more Kentucky Bourbons out there, but this one is starting to rise in popularity.

Sniffing the glass, the overwhelming smell is alcohol followed by sweetness. A vanilla nose beefs out a caramel taffy smell. The dark, rich smells of caramel and cocoa combined with hints of wheat and corn conjure an image of peanut brittle in my mind.

The palate exposes a moderately sweet explosion of caramel and a very restrained initial spice level leaning towards more candy-like cinnamon. The finish is neat caramel, light Red Hot cinnamon, and moderately strong alcohol on the exit. Interesting, mildly harsh yet gets smoother as it sits in the glass. The oiliness and stickiness carry over into the aftertaste. You can almost hear your saliva retreating and hitting the high notes of a “dry mouth duet” as it makes its escape.

JD didn’t set out to create a rye whiskey. Rye whiskey hadn’t been some hotly anticipated release for the brand. No, Jack Daniel’s Tennessee Rye Whiskey was the result of market trends and the desire of the folks at Jack Daniels to not be left behind in a marketplace that is quickly coming to appreciate rye whiskey.

When rye whiskey gives off a light to moderate scent, it is actually giving off complex herbal scents and a little bit of pineapple. Light notes of spices and herbs coming off from the rye make it pleasant to sniff. One may think that such a clean aroma would leave the drinker unsatisfied. But Jack Daniel’s has their own secret to making the rye appealing.

On the palate, it gets a little toasty, with some caramel notes as well as rye spices that dance around my tongue. Once you sip on this instead of chewing it, you’ll notice the extra kick from the charred American Oak barrel. This gives J.D. Tennessee Rye Whiskey is slightly woody and black pepper-like pop. But don’t worry, rest assured that this taste is was quickly taken over by soothing sweet honey flavor along with light mint and anise flavors to keep your taste buds smiling throughout its perfect finish.

It’s generally accepted that Jim Beam Black (6 years old, 86 proof) is one of the best bourbons under $30. That’s pretty impressive for a 6-year-old bourbon. Jim Beam Black Extra Aged is not my cup of bourbon. It’s too simple and lacks the complexities of Beam’s higher-tier bourbons.

Is Jim Beam Black Extra Aged Worth the Money?

It is actually a good bourbon for its money. It’s not on any Best Of lists, being snubbed by many a whiskey aficionado.

How Much Is a Bottle of Jim Beam Black Extra Aged?

The thought of an extra-aged bourbon, one that you would have to sit on for years in order to reap any sort of financial reward is an interesting concept. But, this Jim Beam bourbon doesn’t really have much of that going on, except the name. It is a common bourbon and hardly will increase in value regardless of what happens from now on. It is not very complex with a dominant woody, mildly sweet taste to it.

These two are both bourbons within the same price range. They are both definitely ones of the newest whiskey blends on the market and are very approachable. Many people will ask which of these bourbons they should get. However, Weller Antique 107 is older (7 years old) and it has a slightly richer flavor profile. It gives you a more luxurious mouthfeel and finishes with a smooth smoky “kick” on the back of your tongue.

It’s no secret that Jim Beam is the lynchpin of the Beam portfolio, accounting for a whopping 58% of net sales in 2014. Yet, it has gone through many changes since its founding by Jacob Beam in 1795. The brand has also changed hands multiple times throughout its existence. Aged for four years at the very least, Jim Beam Black Extra Aged is non-chill filtered and bottled at 86 proof, which makes it one of the stronger bourbon releases from the company.