If you like high-proof whiskeys, you’ll appreciate Joseph Magnus Straight Bourbon, which is bottled at 100 proof and was finished for about a month in Oloroso sherry barrels, up to six months in Pedro Ximenez casks, and up to two years in French cognac casks. Both Oloroso and Pedro Jimenez sherries provide intense sweetness. Oloroso is made from dark grapes, and Pedro Jimenez tends to be lighter in color. Each lends different characteristics that can include grape, prune, honey, nutty, savory, and funky notes. 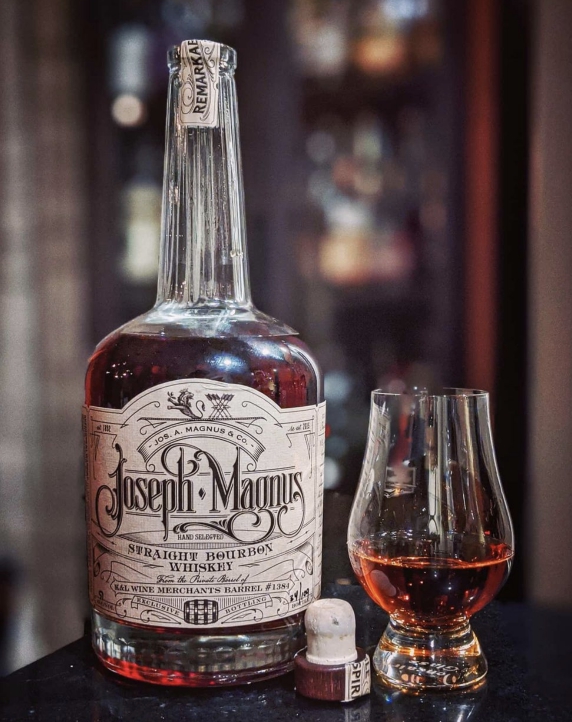 The distinctive appearance of bourbon is proof of a distinctive spirit. The unique bottle and label are sure to catch your eye, but it’s what’s inside that counts. When poured, Straight Bourbon has a red mahogany color with hints of brown. The liquid is clear and ranges from pure to cloudy. Gold, copper, and bronze tones swirl in a glass when it is moved. Chilling will deepen the color and produce a thicker consistency, specifically if water was added to the whiskey after being chilled.

On the nose, it is easy to pick out dried grapes, dark chocolate, “rancio” aged cheese notes, walnuts, and calvados-like super-ripe apples when tasting Joseph Magnus Bourbon. With honey, orange, and toasted cinnamon flavors, it is no wonder this bourbon has been described as both “delicious” and “exotic”.

You might wonder why so many different kinds of wood are used to make bourbon barrels. Straight bourbon that comes out of a freshly charred oak barrel has an unmistakably smoky flavor and aroma which adds an almost meaty quality to the drink. The wood finishes add a lot of dark and ripe fruitiness plus a savory funk note that you don’t get in unfinished bourbon, making it very interesting.

Joseph Magnus Bourbon’s flavors are reminiscent of the smells that waft from an open bottle of liquor. At first, you taste the aged brandy’s rich, funky sweetness of honey, ripe grapes, and dates. Then, a warm vanilla flavor spread through your mouth like the melting of honey drizzled over apples. The overwhelming combination of spicy rye notes with a fruity aroma and earthy colliding into soft vanilla makes it the ultimate choice for sipping neat or on the rocks. The oak here shows you more about itself and has less fire than the nose suggests, for good measure.

​​When I really let the spirit roll around my mouth, I get a lot of rich and profound tasting notes: dried grapes, prunes, caramel, and honey. And then there’s the mint. It’s like a sweet tooth kiss from my wife every time she leans in for an embrace. What a treat!

Your tastes will certainly be pleased by the aftertastes in Joseph Magnus Bourbon. It finishes with a fruity overtone and a hint of dryness which is perfect for sipping. The mint note lingers for a few seconds to further enhance the flavor. Oak, vanilla, and honey fade into notes of apple and mint, which linger on the palate for a few minutes after you drink it.

Frankly, it’s not easy finding something to drink when you are on a straight bourbon kick. Finding whiskey like Joseph Magnus Straight Bourbon can be a challenging experience, especially if you don’t know what to look for. While there are plenty of cheap alternatives out there, they generally aren’t that tasty. Let’s discover some propper alternatives.

One Eight Distilling Untitled Whiskey No. 13

One Eight Distilling is a distillery in Washington, D.C., that offers a range of spirits, including craft and sourced whiskeys. They offer an array of award-winning spirits to experiment with, as well as can make custom blends to fulfill special orders. They use fresh locally sourced ingredients for their liquors and are open on Saturdays for tastings.

The best way to describe this whiskey is “fruity”. On the nose, there’s rich dark honey and spiced orange aromas mingle with an undercurrent of toasty and old wood, cinnamon, and dark chocolate. The mint aroma is less forward than the spiced orange but is as refreshing and only provides refreshment which is a nice interplay with all of the other flavors. The aromas coming out when swirling the whiskey include nutty and funky sherry notes with prunes, dates, honey, baked apples with cinnamon and clove, candied and spiced fruits from Cognac, and a hint of vanilla.

It’s kind of hard to put into words what this whiskey tastes like. You might say it’s sweet and lively, almost like a spirit made from wine grapes. It’s been described as many things: “the first glass of wine on a Saturday night” and “dangerous because it smells so good.” Either way, you’ll want to bottle your friends and keep them around for a while.

If you’re looking for a change from the everyday whiskey, Buffalo Trace’s Weller Special Reserve is the way to go. It’s an extremely reasonably priced bourbon that offers a complex and full-bodied taste usually associated with whiskeys two or three times its cost. The bourbon is best if you want an alternative to the usual Jimmys, Jacks, Takers, and Makers.

Weller Special Reserve opens with aromas of honey sweetness and floral citrus, while flavors of apple, strawberry, vanilla, and a thin layer of toasted oak make you want to take a bite.

Weller Special Reserve is a noseful of toasted oak, spice, and hints of dried fruit. In the mouth, this whiskey is loaded with flavors of apple pie spices and sweet stone fruits that linger on the back of the tongue long after the sip is gone. Everything about this Kentucky Straight Bourbon Whiskey reflects its place in time. It is the kind of whiskey you want to keep around for a good conversation.

The Van Winkle Special Reserve 12 Year has been a favorite among whiskey aficionados since its release. This bourbon is made using Buffalo Trace’s well water as well as limestone-filtered spring water for the mash components. Also, it is non-chill filtered to retain all of the natural and flavorful oils which are removed from other whiskeys during this process.

It is challenging to detect any disagreeable elements in its complex nose; it smells super-sweet, like a glass of sweet pear cider, with some dryness and an undertone of oak that’s barely perceptible. Its flavor isn’t quite as balanced as the nose, but that’s not surprising when one considers that the nose smelled more like a brand new car whereas its taste was reminiscent of a classic car. The wood is far more prevalent in the flavor than it is in the nose (though this isn’t a downside).

The finish is long and dry and considerably more tannic than the taste had been; there also were hints of pits and seeds at the end. Overall, this is excellent bourbon that many people will love with an oaky finish. Van Winkle has consistently produced excellent whiskey over time, and this special reserve is no exception — while it doesn’t get 10s from me across the board — particularly for color — it is still very good bourbon with solid scores that are well-deserved and highly recommended.

If you enjoy the smell and taste of sherry and cognac — influences evident in the flavor of dark fruits like plum, raisin, and fig — then Joseph Magnus is your bourbon. It’s a rich take on the classic American spirit made with Tennessee corn, wheat, and Barley.

Is Joseph Magnus Straight Bourbon Worth the Money?

Sipping a glass of Joseph Magnus Straight Bourbon, I know the money I’ve spent on it was well worth it. My opinion is based on my knowledge and experience with other whiskeys; also based on what others have told me after trying this brand. You’ll enjoy sips that are true to their origins and more complex than spirits aged less than two years.

How Much Is a Bottle of Joseph Magnus Straight Bourbon?

You can buy a bottle of Joseph Magnus Straight Bourbon for about $80-100 right now. That might seem like a lot to pay for alcohol, but the bottles are highly valuable.

People who drink whiskey know that some bourbons age in casks for a long period of time to get their unique flavor. And the older it is, the better taste it’s going to give you. However, there is a bourbon on the market that gains value over time instead of aging. If you want to improve your health and wealth, then a bottle of this bourbon is the way to do both.

I prefer Joseph Magnus Straight Bourbon over Weller Special Reserve. Both are micro-batch bourbons and thus, are quality products. However, I find Joseph Magnus to be superior — it is just a little bit sweeter and has less of an alcohol bite at the end.

The bottles of Joseph Magnus are true Kentucky bourbon because the grain composition for this whiskey is sourced only from Kentucky. It’s a straight bourbon which means that nothing else was added to it. Plus, sherry and cognac barrels were used to help change the taste and create something truly unique.