There’s a rye whiskey that we might have overlooked in the flood of releases that have come on the market recently. Redemption Rye is from MGP, a huge distillery in Indiana that has perfected the process for producing neutral grain spirits for various types of alcohol. They also sell their distillate to unscrupulous brands who slap their name on it and charge many times more than they paid for it (I’m looking at you Bulleit). This whiskey is something unique in today’s market, which probably explains why it is still on some store shelves at a mere $100.

Rye whiskey is known for its spiciness and big, bold flavors, but what makes Redemption Rye stand out from all the others on the shelf is its age. Redemption Rye is a double-digit, aged-stated, and cask strength MGP rye. This is just a fancy way of saying it has been around for a while, should be taken in small doses, and at high proof. Oh, and it is delicious. And I am here to tell you all about this magnificent dram and why it’s worth your time and money. 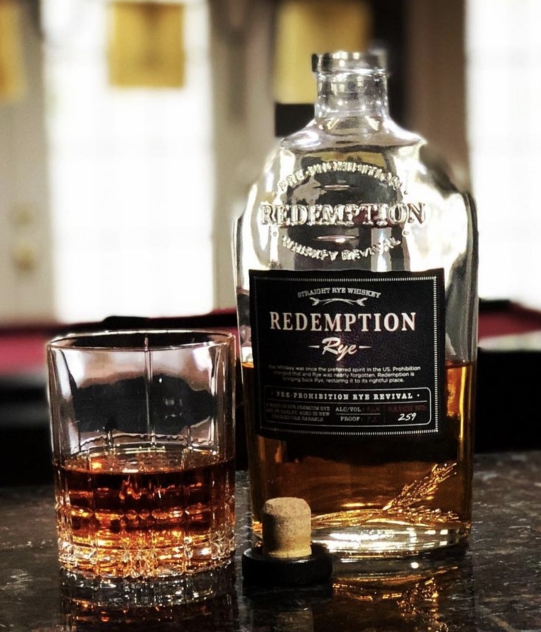 Its tawny color is really dark which shows that this whiskey is well-aged. As you can see the color of the whiskey in the glass, looks bright when you look at it in the bottle. In a bottle, we realize that Redemption Rye has a better color presentation compared to other whiskeys from Heathfield Distillery. The whiskey produces long tendrils that linger on the glass when poured, and the tendrils have a tendency to hold their shapes for several seconds before dissolving on the rim of the glass. The appearance is similar to that of pure maple syrup.

Fully immerse your senses in this multi-faceted and complex whisky. The nose is fully packed with heaps of caramel, charred meats, and the almost sweet flavor of licorice, yet at the same time you can pick out the bright and tart scent of guava along with dill weed. There is a hint of bitter orange aroma from the maraschino cherry but also the smoky bitterness that comes from a grilled pineapple. Come to think of it, so far Redemption Rye reminds me a bit about a pineapple upside-down cake.

This is what happens when you let the liquid age for a few years and continue to blend in small batches. The rye is front and center from start to finish, but there’s much more to it now. It’s darker honey, tons of licorice and fennel; roasted and candied pineapple, lychee fruit, roasted oak, rosemary, and dried cherries.

There’s a touch of dryness that’s mingled with the wood and ginseng — and the woodiness takes hold in the middle and at the end, but it doesn’t swallow up the dram. It doesn’t stand out much but dries out your palette and lets you know it’s there. There’s a spirit-driven aroma with some dill seed and citrus peels along with a cake-like aroma that recalls a caramel vanilla cake I had as a kid on birthdays. The overall taste is quite deep and warm with the spice of the rye shining through.

The aftertaste is complex and interesting — hints of lychee, oak tannins and spices dance around with a tiny bit of candied pineapple. After ‘chewing’ on it for a while, I taste more of the rosemary, dill, and anise than the pineapple or lychee. It has a sharper, somewhat spicy rye whiskey taste not common in spirits. The flavors blend much better with water and I actually prefer this way. With water, I’m getting more earthiness with oak and pine, a lighter flavor from the fennel, and a subdued herbaceous finish. Such an aftertaste reminds me a bit of a sweet Manhattan.

Let’s just get this out of the way. Redemption Rye is good rye whiskey and one that I personally enjoy. But it isn’t for everyone. There are several Redemption Rye alternatives at your disposal if you ever want to try a different whiskey.

When Smooth Ambler announced the return (but not the permanent return, mind you) of their Old Scout program, a parade of people (and distillery fans) filed up to the ticket window. Smooth Ambler Old Scout 7-year Rye is a 7-year-old whiskey with the same 95% rye MGP backbone as Bulleit Rye, but it has the star treatment with an age statement and higher proof.

The nose on this has a splash of vanilla, honey, sorghum syrup, and grain that combined with the fruit are like berry pancakes covered in syrup.  The rye is not sharp at all but has a smooth spicy bourbon vibe to it. The more you smell and taste it the more you get of the barrel for some reason.

Sweet and bitter — opposites that really do fit well together like a pair of dancers at a salsa club. A bit of familiarity, with the apple and honey mixing with the bold rye. But our old friend peppermint (which is to say wintergreen mint) seems out of place.

WhistlePig is called a “New American” whiskey. It’s made from 100% rye grain that’s sourced from three different distilleries in Canada where the whiskey is born. From there, this Canadian rye whiskey is imported to Vermont for additional aging and maturation.

The first thing you notice when you uncork a bottle is the intense aromas. It’s pungent and aromatic with a massive, prickling nose. The aroma is bright and lively, with vibrant fruits including tangerine, grapefruit, pineapple, and papaya.

Swirling, there’s a tropical cocktail in taste (I wouldn’t have pegged it for that, but I can see where you’re going), but not nearly as sweet (those bits of fruit peeking in). It’s also got a light singe of alcohol (that burn in the back of your throat), a gentle wood poke (the kind you get from an old oak floor), and just a sprinkle of peppermint (hard to place, but it fits).

Kentucky Owl didn’t garner much attention when it first arrived. In fact, I don’t recall ever hearing about it until after the hype had died down. The reason for this is simply due to the price tag. At $130 a bottle, there was little chance I was going to try this offering. I’m not saying that a rye whiskey can’t be worth this kind of money, but to have my mind changed on that front would take some doing.

The first thing that hits your nose is this big rich and in-your-face aroma: maraschino cherry, licorice, candied pineapple, vanilla, marshmallow, and rose petals. Those notes are the most noticeable ones to me. There are a few more underlying aromas like oak and cinnamon that come forth from time to time.

You take your first sip and feel the warmth as it glides down your throat to spread its warming effects throughout your body. It’s almost shocking how smooth it feels — the whisky is soft with no bite or harshness. As you taste it, you can feel charred oak, cinnamon, and nutmeg all combining with the big candied sweetness of the whiskey — it’s incredible.

​​Redemption Rye is one of the most unique ryes on the market. You can taste it from the nose all the way to the finish. Redemption Rye is about as close as you can get to the perfect rye whiskey in my opinion — balancing wood, spice, and cinnamon notes with a pleasing dryness.

Is Redemption Rye Whiskey Worth the Money?

There are less expensive products out there if you’re on a tight budget. Redemption Rye is a bit pricey but it is definitely worth the money. So, if have a chance to buy it now, go for it!

How Much Is a Bottle of Redemption Rye?

There is more to this whiskey than just a high price tag. This is the second release from Redemption, the first being its straight rye whiskey the cost of a bottle of Redemption Rye is $100.

Does Redemption Rye Increase in Value?

The idea behind this is simple. Redemption Rye becomes more valuable as time goes on. The reason for this is that its value will be based on increases in the demand curve, not supply. In other words, the only way you can make money with Redemption Rye is if it’s worth more — each day after you purchased it.

Is Redemption Rye Better Than WhistlePig 10?

Me personally, I prefer Redemption Rye to WhistlePig 10, although both whiskeys are interesting. Whereas this expression is more subtle and less assertive in its overall delivery, it also (to me) has a richer and rounder profile when compared to the more austerely grain forward WhistlePig 10.

There is a unique and special thing about drinking this rye whiskey. It boasts an incredibly complex flavor profile with immense depth and broad appeal, which may be why it’s enjoyed by those from all walks of life.