Although Templeton Rye’s creators claimed it was based on a prohibition-era recipe, the truth is that recipes for rye whiskey have varied widely in different eras. Therefore, claiming to have a single, secret recipe is likely an exaggeration. However, thanks to its origins in prohibition-era Iowa, Templeton Rye has acquired almost mythical status. But is it really any different from other ryes? 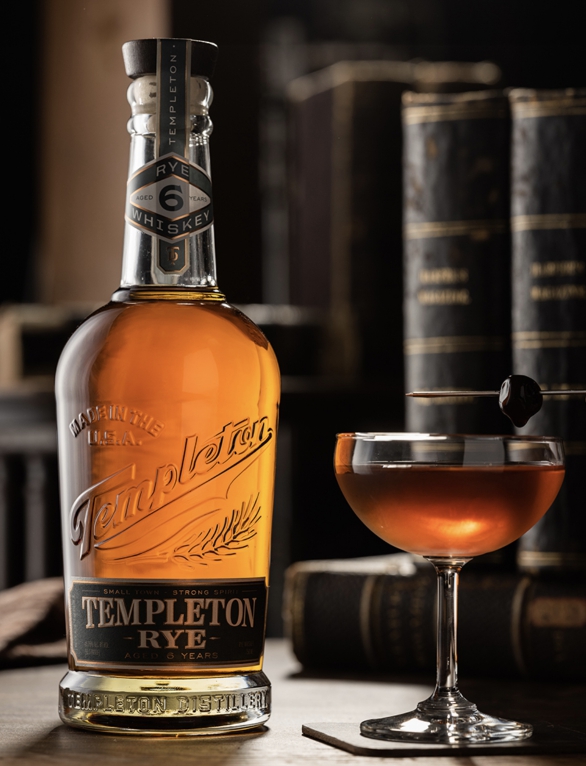 The first thing you can tell about its appearance is that Templeton Rye whiskey has a more subdued color than other whiskeys with rich, deep colors.

In mixed drinks, its muted color is a nice complement to the cocktail’s other ingredients, its pale color is very attractive. It also can be enjoyed on its own and on the rocks. When swirled, this rye produces scattered droplets. The lack of legs means that the whiskey is light on flavor.

Templeton Rye is an interesting “booze” because its color gives an effect you might not expect. Color may seem like a trivial aspect to consider when you’re drinking whiskey, but it can be indicative of the drink’s taste and smell. Templeton Rye’s color is unusual and looks almost like caramel.

The nose on this whiskey is amazingly complex; many different scents greet you as you breathe, and those scents shift as the whiskey breathes. When first smelling it, honey and grain rise up and give way to a sweet scent that reminds you of caramel or butterscotch. The sweet and spicy combination wafts into the air and beckons you to drink.

The aroma of Templeton Rye whiskey is remarkable. It’s almost impossibly smooth, with an incredibly complex, but very subtle flavor. It has a unique, soft orchard-like quality not usually found in other ryes. This is due to the apples used in its expression. You can scent some sweet corn and distinct spicy rye aromas.

I can feel a lot of apricot in it but there is also a considerable amount of spiciness to it.

If you’re looking for a whiskey with robust flavors, this may be the one. With a full range of baking spices, Templeton Rye balanced it nicely with creamy butter and smooth warm toffee fullness. The first sip is a little spicy but as you sip more the spice balances out. You can feel the warmth immediately when you take the first sip. The body of this whiskey is fairly easy to drink. It’s soft and almost syrupy. Templeton Rye has a flavor of vanilla and it ends with a taste of burn.

‘Chewing’ gives it the nutty nougat and sweet caramel notes that are very well replicated on the palate. The level of tongue burn is very low. When you drink Templeton Rye whiskey, it has a nice rye kick to it.

Adding a few drops of water to Templeton Rye whiskey intensifies the nose tickle without adding new aroma notes. A small amount of water may bring out some more flavors at first, but once added, the true rye character is diminished instead of enhanced.

The finish is medium length. A one-trick pony, so to say. It’s a rock and rye and that’s it. You could argue that there’s some oak or grain, but it’s hard to be sure. It doesn’t have the complexity of the other rock and ryes, but maybe that’s no bad thing in this case.

The two main tasting notes are mint and bell pepper. There’s a bit of a bitter aftertaste. It is quite aromatic, with an up-front fruitiness. The wait is long but not dull, with a woody hint of menthol sticking around at the end. The aftertaste is a little livelier and introduces a bit of lemon zest. It’s quite different from the initial taste.

Templeton Rye is a classic whiskey brand, but it’s not for everyone. If you’re looking for rye that balances the right amount of spice and smoothness, then you may find your match with Templeton Rye alternatives.

Rye whiskey is an American tradition, but it’s not something most people drink on a day-to-day basis. Knob Creek Straight Rye Whiskey from Jim Beam fits this description, which means it has a lot of opportunity for growth. It’s a widely available and relatively affordable rye whiskey from Jim Beam, one of the largest American whiskey distilleries.

That’s true cincinatti-style recipe, a rare sweet mash, making a full flavored rye whiskey with a spicy bite. When you smell it, you can smell the sweet corn but then the alcohol comes out followed by oak, aniseed and a little bit of molasses.

Knob Creek Rye starts off with honey, licorice, anise, earthy fennel and caraway seed, oak tannins, cinnamon, clove, vanilla, citrus, and pear. If you’re a fan of rye, then Knob Creek Rye is a must-try. It offers a different twist on the style while still having a strong traditional rye backbone. It goes great on it’s own, but I sometimes add a bit of water to mellow it out even more. This is one whiskey that will make its way into your regular rotation for many years to come.

Woodford Reserve is one of the big boys in bourbon. In fact, it’s the official bourbon of the Kentucky Derby and has been since 1999. It treats its product just as carefully as a race horse. All of its barrels are from a single day’s distillation from the Woodford Distillery.

The nose on Woodford Reserve contains a lot of classic sweet bourbon notes, but also some sharper notes of charred oak and grain. The balance between the sweeter and more aggressively malty characteristics is quite interesting and will keep you coming back to get more of that beautiful aroma. It smells like bread and grains followed by a hint of mint, fruit, and nuts.

Woodford Reserve Kentucky Straight Bourbon is one of the prized bourbons on the market today. What makes whiskey “bourbon” is the distinct way in which it’s made and Woodford is no exception. It’s made with 94% corn mixed with 6% malted barley and 2% rye, and it’s distilled between 160 and 190 proof. This ensures that all of the grain flavor comes through — this isn’t watered down cheap whiskey with a high alcohol content. If you add in the fact that 86% of their barrels are American Oak and 12% are Spanish Oak, then you know there’s going to be a lot of flavors packed into each sip. Woodford Reserve Kentucky Straight Bourbon is a light, sweet bourbon with mint flavors that has a peppery and sharp wood aftertaste.

Wild Turkey 101 is probably one of the most, if not the most, popular budget bourbons within the bourbon community. It’s definitely the best seller out of the three bourbons that Wild Turkey produces, and can often be found on sale at your local liquor store.

When you first take a sniff, you get hits of rye spice, vanilla, and caramel. There’s also some corn mash present. There’s a light amount of oak that gives off smoky notes into the nose that are blended very nicely with the sweet bourbon mash aromas.

The flavors in Wild Turkey 101 are so blunt and simple, it tastes like you’re drinking a solid whiskey instead of an 80 proof one. It has a taste that has too many weak to strong flavors dominated by burn. Wild Turkey 101 is far from extraordinary. Every sip has a mix of light to moderate sweetness, peppermint spice, cinnamon, oak, grain, and alcohol.

Now, maybe you’ve tried some whiskey before, or maybe you’re a soon-to-be rye convert. Either way, you’ll find the flavors in Templeton Rye offer a great entry point to the world of straight whiskey.

Is Templeton Rye Worth the Money?

Everyone loves a solid deal. True whiskey connoisseurs understand that a great deal on a bottle of whiskey isn’t unheard of. Finding a deal can be exciting, but sometimes when you find an offer that seems too good to be true, it probably is. In this case, the bottle of Templeton Rye is definitely worth it.

How Much Is a Bottle of Templeton Rye?

Does Templeton Rye Increase in Value?

The price for Templeton Rye has not increased, but demand has led to retailers to raise prices. If this was your favorite whiskey you might be wondering what you can do about it since it seems like Templeton Rye drink costs are rising. The good news is there are plenty of ways to stay within budget when buying this whiskey.

Templeton Rye and its cousin, Wild Turkey 101, are some of the most reputable ryes in the world. Although they differ in price (Templeton is significantly cheaper) and taste (W101 has a smokier taste), they’re both brilliant examples of their type that any true whiskey fan should enjoy.

After all, it’s only the purest Iowa corn, four-year barrel-aged whiskey in America, and arguably one of the best bourbons you can buy for under $50. Still, after over a century of operation and a cult following, there remains several unanswered questions about how and why this Templeton is so damn special.