Tullamore Dew, a large Irish whiskey distiller but a far second to Jameson, is often known for their entry-level Tullamore Dew Original in the green label. However, there’s a much higher quality product, and actually, one of the highest-scoring whiskeys you could have ever tried. With an approachable yet complex taste, Tullamore Dew has everything you could possibly want from a mid-range whiskey.

The green label is considered to be the entry-level whiskey for Tullamore Dew and is often the most common bottle in both on and offline stores. It’s a relatively smooth Irish whiskey with a definite sweetness to it and an almost oaky finish which leads you to believe it’s not mashed or distilled all in malted barley as you would expect from a budget Irish whiskey set at this price point. 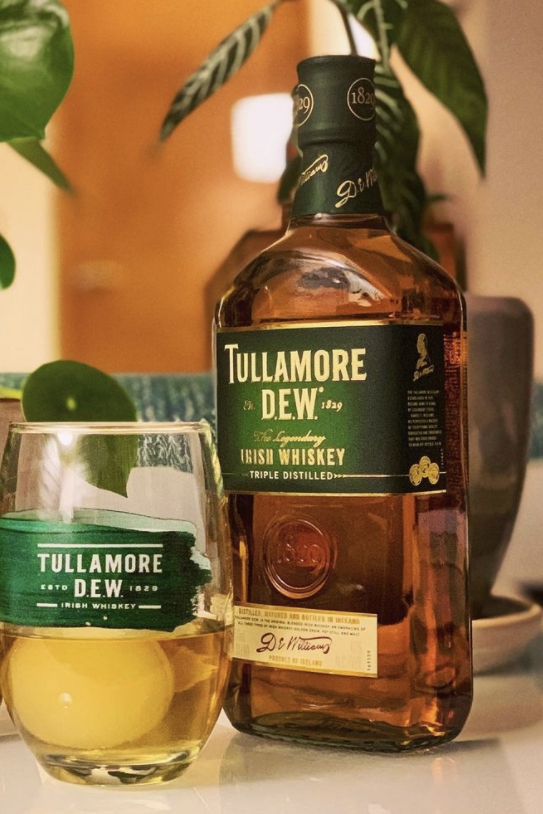 The appearance says it all. The color is a classic of the genre. It is quite saturated with amber. It has a rather unpalatable density for most drinks. The color gives off light, it reflects it when direct light hits it. It is opaque in vibrancy.

The nose has a very strong alcohol presence, followed by very light sweet notes of honey, green apple, pear, and grains. There is virtually nothing indicating that it was finished in sherry casks. However, you can’t distinguish between this whiskey and other alcohols, because the scent of alcohol is overwhelming, and it drowns out the subtler aromas in the whiskey.

Tullamore Dew whiskey has a bewitching flavor and aroma. It is one of the most famous and popular whiskies in the world. This whiskey has bright vanilla and sweet tasting notes that are intertwined with light floral notes of green fruits such as apples and pears. Here you can taste very interesting oily and spicy notes.

Tullamore Dew has a little ginger spice that’s not too overpowering and a hint of pepper spray that gives a little spicy kick on your palate. This is a whiskey with a light, crisp taste that is reminiscent of toast or light yeast. It is a very traditional whiskey that has stood the test of time. A lot of whisky aficionados agree that Tullamore Dew tastes exactly the same as it did 60 years ago.

In the beginning, the alcohol is very noticeable. It may be numbing while it is on your tongue, but after you swallow the alcohol, it leaves a combination of sharp wood, honey, apple, and pear flavors. However, once the alcohol gradually wears off, you’ll be left with a fruity sensation that will stick with you for a good while.

Jack Daniel’s has been around for a very long time. In fact, it isn’t just the oldest registered distillery, it’s the actual first distillery in Tennessee. Jack Daniel’s Old No. 7 doesn’t really need an introduction any more than Coca-Cola does. I think even the non-drinking majority has heard of this Tennessee whiskey/bourbon, possibly not knowing that it is both (although, I tend to think that most people who hear about Jack Daniel’s know that it is both).

Jack Daniel’s Old No. 7 whiskey is a sour mash whiskey, which means the mash used for this is made up of both fermented and unfermented grains. This whiskey also has three-grain recipes used to make it, corn, barley, and rye. You can definitely taste both corn and rye most prominently, with barley fading into the background. It’s a nice combination that really gives this whiskey some extra character, without being too overpowering or overly sweet.

It is the balance of sweet and spicy that Jack Daniel’s does so well. Like other Tennessee whiskey, this one is made with corn which gives it the sweetness but the rye makes its presence known. The proof here is 100.

Jim Beam, the big bourbon brand you already know, is becoming even bigger. This whiskey hopes to dominate the whiskey market and bring more attention to the already good name of Jim Beam.

Nose: Wow, what a rush of vanilla and caramel sweetness with orange rind and cherry. The charred oak barrel notes eventually break through but it’s not nearly as potent as what I was expecting. Butterscotch is one of the first flavors you notice once that initial rush fades out. There is some brown sugar or demerara sugar that carries into the finish that’s complemented by the subtle woodiness.

Regarding the taste, caramel, vanilla, and citrus flavor notes lead the way, carrying over into a long and lingering finish that follows suit with deeper notes of charred wood, floral pine, and nutty peanut butter.

Single barrel bourbon is something of a craze at the moment. Blanton’s Single Barrel is often considered the original single barrel bourbon sold in the modern market (the past 40 years or so). The rickhouses used for this brand are located on the Buffalo Trace Distillery grounds in Frankfort, Kentucky.

The first smell has a nice, somewhat thick smell of caramel, wood, sweet corn, and honey, followed by a moderate cherry sweetness, almost like cherry soda. The taste is a great balance of citrus and cherry with a big kick of honey, with some sweetness from the corn coming through.

A little sweetness on the front of the palate with some dark nuances (chocolate, raisin, and coconut), malty grains with hints of orange cereal, tobacco, some mild spice (cinnamon, clove), slightly dry finish.

“Take Me On”’ is the title of the TV ad, in which an old Irish man asks his grandson if he’s looking for something smooth. The boy responds with “Tullamore Dew”, to which the old man simply says “Right answer” in that thick Irish brogue that we love so much. The commercial is meant to be in line with the strength of the whiskey itself.

Tullamore Dew is smooth whiskey. In fact, it’s the smoothest whiskey you’ll ever encounter. And not only that, it comes from Tullamore, Ireland. If you’re looking for a different taste from the normal run-of-the-mill whiskeys, you want to try Tullamore Dew.

Is Tullamore Dew Worth the Money?

It’s a question that has been on the lips of whiskey drinkers the world over for many years but has never really been answered. This is down to one simple reason. Everyone thinks their own whiskey is the best. And everyone thinks their whiskey is worth every cent. Tullamore Dew is an Irish whiskey with a huge following among women. And if you can buy a decent whiskey like this for under $30.00 then why not?

How Much Is a Bottle of Tullamore Dew?

It’s a common question. With so many different whiskey drinks being sold, it can be hard to compare them all. And when it comes to whiskey, Tullamore Dew certainly makes for an interesting discussion. The cost of this Irish whiskey is lower than $30.00 ($23.99 to be exact) per bottle. As you are getting a bottle with a trustworthy name on it with a long history it’s a bargain.

Does Tullamore Dew Increase in Value?

The history of this iconic whiskey is surrounded by stories — some maybe even rivaling Mark Twain. It’s good to know if it’s worth your time spending many hours driving around Ireland attempting to locate some bottles for future investment purposes. There are some collectibles on which there is no doubt, any whisky connoisseur will tell you that Tullamore Dew has gone up in value. With the increase in demand for this bottle of Irish whiskey, it’s no wonder that antique stores are having a tough time keeping it in stock.

Is Tullamore Dew Better Than Jack Daniel’s Old No. 7?

At the end of the day, it depends on what you mean by Better. If you love a night of whiskey drinking or a good whiskey to sip, then you have noticed that they have remarkably similar branding and taste. Both whiskeys are made of corn, barley, rye, and malted barely and they both are distilled at 40%ABV.

Tullamore Dew is an Irish whiskey and is one of the most known and popular whiskeys to be produced in Ireland. There are whiskey connoisseurs, and then there are Tullamore Dew fans. These fans love the Smokey-sweet taste that’s made Tullamore Dew the fastest growing Irish whiskey in America. The taste of age and history makes it genuinely unique.