Weller Special Reserve, an entry-level bourbon from Buffalo Trace Distillery, is rumored to be aged a minimum of eight years and has earned quite a reputation for itself among both amateur and experienced tasters. It is mentioned that it’s a weated bourbon. The term wheated (as it applies to bourbon) refers to a mash bill (the recipe for making a particular whiskey) that uses wheat and corn; where corn is still the top grain in the mash bill, wheat is secondary. It has hints of dark honey tones and is understated in appearance and flavors profile. 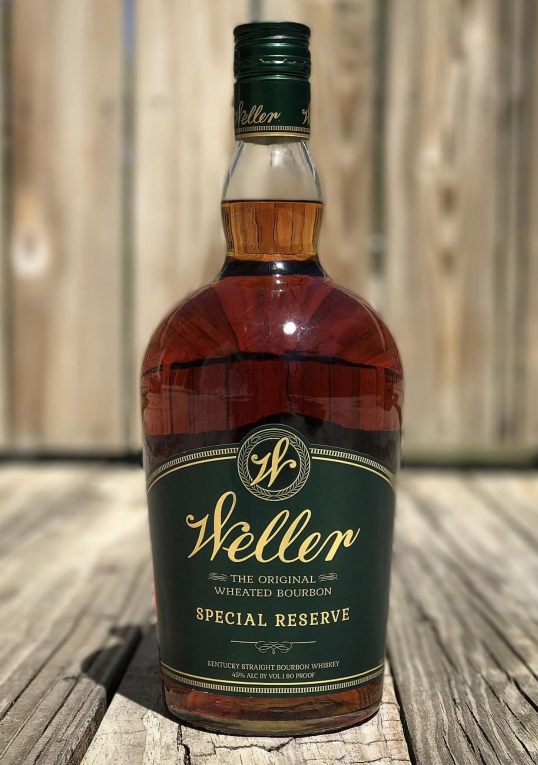 W.L. Weller Special Reserve is the most available bottle in the W.L. Weller lineup and was once one of three bottles (along with W.L. Weller Antique 107 and W.L. Weller 12 Year) produced on an ongoing basis and sold in liquor stores all over the United States.

When this bourbon is heated up in a warm glass, it has a burnished color that resembles the summer sun going down while it briefly takes away the daily grind. This dazzling sunset-like character disappears quickly but certainly leaves an impression. When you hold it up to the light, that’s when you notice how a lot of it tends to stick to the glass. These are a few indicators that you have a pretty good pour. It’s what I call a wet noodle.

On the nose, this bourbon offers honey sweetness with floral citrus, apple, and strawberry notes. Vanilla, a thin layer of roasted oak, and crisp hay flavors follow. A dash of cinnamon spice completes the aroma profile. It doesn’t have an overwhelming nose, but it is certainly gentle and delicate. If you were handed a glass of this bourbon, you would know exactly what it was.

Swirling the wine in your glass serves to release aromas of honey, vanilla, canned peaches with cinnamon, and oak. The scent of heat is in the air early on, but as you keep sniffing, it fades away.

This bourbon offers a sweet dark flavor with honey, oak, cinnamon, and dried grass hints. The palate is somewhat richer in the mouth, revealing citrus and vanilla flavors along with apples. The absence of spice seems purposeful, likely a result of the corn-heavy mash bill and low proof, allowing those sweet flavors to really flourish.

I’ve found that “chewing” gives me a similar floral honey and vanilla sweetness with apple and peach, but also constantly reminds me of its thin mouthfeel and weaker tasting notes. The experience is pleasant and refreshing, with little to dislike except its gentle nature.

This bourbon finishes with a warm, tannic taste of honey, cinnamon, apple, and cracked black pepper. Once you add a tiny touch of heat, you’ll notice a more pronounced oakiness in the wine’s scent than what came across in the nose or on the palate. Surprisingly, aromatic notes of mint and rye spice linger on the palette, even though there’s no rye in this bourbon. The pepper’s like a peppercorn, but it comes from the bark of trees. It gives your mouth a tingly sensation. Honey and caramel flavors appear again for an encore, turning a general oaky taste back to a sweeter version with hints of vanilla to close it out.

The Weller Special Reserve is one of the most sought-after bourbons in the world. That’s why it can be so frustrating when friends, family, and your local liquor store run out of this sought-after bourbon. Here are some of the affordable alternatives for you out there.

It’s one of the best wheated (I’ll talk about that in a second) bourbons on the market, produced by Buffalo Trace.  It’s $23 for 750ml and I don’t think you can find a better deal on any other top-shelf bourbon. It has spent a lot of time aging in barrels where you get that nice robust flavor without being too strong. It pairs well with virtually anything and is crazy smooth.

The nose on this bourbon when first opened reveals a moderate mix of caramel, wood, vanilla, honey, and alcohol that form the foundation of the nose. After a few minutes of having the lid off, it can breathe, leading to the smell of caramel taffy getting even stronger. This combination smells like a caramel taffy soaked in alcohol.

When I first tried this bourbon, I thought it tasted too hot and spicy. After thinking about it a bit more, my opinion changed. Now, while I can taste the hot and spicy flavors in it, they are not like the spice in pepper. You can taste a variety of flavors such as vanilla, wood, nutmeg, and maybe a little almond.

“Old Fitzgerald used to be a brand, but not anymore.” In 1984, Heaven Hill picked up the brand and renamed it Larceny. No idea why they didn’t keep the Old Fitz name. Larceny Small Batch Bourbon is a wheated bourbon from Heaven Hill that competes with other budget wheated bourbon offerings. Coming in at $20-30 a bottle depending on whether you are in California or Kentucky, Larceny Small Batch is an excellent bang for your buck.

​​Right upfront, you get the pleasure of experiencing the delicious sweet flavors of caramel, nougat, and floral/grassy notes with a hint of deeper sweetness. It almost sounds like an over-complicated description from one of those whiskey connoisseurs. But don’t be fooled. There’s nothing complicated about Larceny Small Batch. It’s light on the nose.

This bourbon is full of flavors that you can’t help but notice. When you take the first sip, your taste buds sense a plethora of different characteristics depending on what you are looking for in a bourbon. The first thing I noticed was caramel, toasty nuttiness, and earthy flavors on the tip of your tongue. They are mirrored in a finish that lingers for a time, warming you to the very core.

Of all the wheat whiskey distillers on the scene today, Heaven Hill is among the most widespread. And demand for the stuff is growing, especially since other distilleries have started to release their own recipes or source from MGP (a whiskey factory in Indiana).

On the nose, Bernheim Wheat Whiskey is dark and earthy with a touch of caramel, warm oak, dark chocolate, orange peel, and roasted bread. There are notes of warming cinnamon and nutmeg.

Your mouth will taste caramel and brown sugar with coconut, vanilla, orange peel, apple, roasted oak cinnamon, and cocoa powder. No matter how you choose to drink it, Bernheim Wheat Whiskey is perfect on its own or in your favorite cocktails. It’s also a phenomenal base for bottle-conditioned homebrew.

Weller Special Reserve is a consistently delightful, and charmingly playful bourbon. It radiates warmth from beginning to end, and never fails to leave a smile on my face as it goes down. But, from there, it’s that perfect balance of flavors and delivery that really causes this to stand out as a good sipping bourbon.

Is Weller Special Reserve Worth the Money?

This bourbon is really popular among other bourbons and most users claim that it’s quite underrated and one of the finest bourbons out there. It is also understandably very affordable in comparison to other popular brands.

How Much Is a Bottle of Weller Special Reserve?

If you love whiskey and the idea of the perfect pour, this is the category for you. Not only does it have a smooth taste, but it also has a pretty low cost per bottle when you take into account its availability across many states. You can buy it for about $22-30 and it’s typically the one you can find at a local liquor store.

The quality of this whiskey is most evident when it’s served in the classic “everyday” style. People seem to be interested in everything the Weller company has to offer. Accordingly, as the demand for anything with the Weller name on it increases, so too does the price. However, in my opinion, Weller Special Reserve is a solid bourbon, but I certainly wouldn’t spend an exorbitant price on it.

It’s not a secret that two types of bourbon – Weller Special Reserve whiskey and Bernheim — are both quite popular in the world of whiskey lovers. These two whiskies are at the same price range. I personally prefer Weller’s whiskey over Bernheim because it is darker in flavor. I love a well-aged bourbon, and although Bernheim was aged for 7 years, it just doesn’t do it for me.

Years ago, back when I first started drinking Weller bourbon, it was one of only a handful of bourbons that used wheat as the secondary grain in their mash bill. Before I became accustomed to drinking better bourbons, Weller Special was my favorite for sharing with guests and it was the bourbon I reached for when introducing others to the world of whiskey. However, over time, its uniqueness lies in developing its own history.