The industry is crowded and there are a few major players that have dominated the marketplace. If you’re going to throw your hat into the ring you had better bring something unique to the table. WhistlePig is a Vermont-based company that specializes in aging their rye whiskey. It’s no surprise that their whiskey is made in Vermont, considering one of their two ryes in their blend is from the state. The process is an interesting one because it also undergoes 6 months of rest and finishing in new charred oak casks, which makes each bottle a distilled mash-up of styles and flavors. One might think it’s crazy to talk about value when it comes to 15-year whiskies but let me explain. 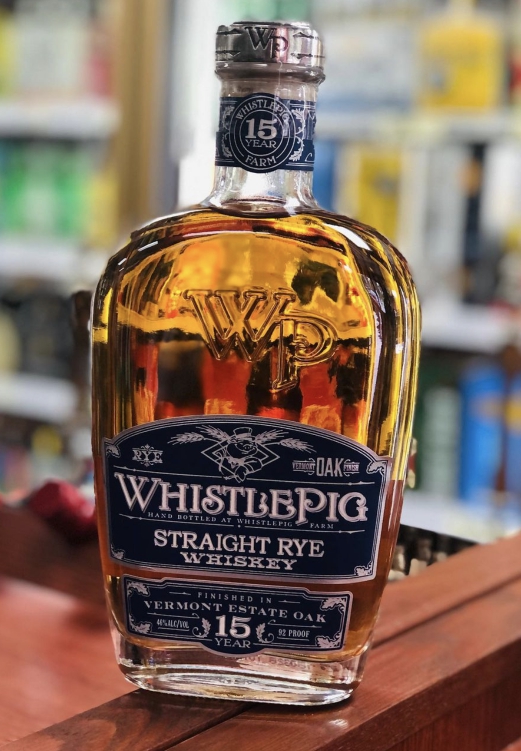 The color of WhistlePig 15 Year Rye is light caramel and not only am I speaking in a whimsical tone, but I’m also actually quite serious. Yet despite the slight color, this whiskey has gone through a lot and you can taste it. The color comes from age, rye grain, and the char of the barrels. During distillation, copper worm tubs are used, which bring a very unique flavor and a small amount of copper to the wash. Partly, it’s the appearance of this whiskey that makes it so unique.

What do you get when you pour some 15-year-old rye whiskey into a snifter? The woody aroma of vanilla extract, oak sawdust, and a hint of mint and lavender. After spending a few moments with my second sniff, the licorice calms down a little, bringing out sorghum syrup that’s heavier and more complex than before, as well as oak that isn’t overpowering. Pear, citrus peel that’s been dried until it’s dense, rye grain, pine, and fennel.

It is the type of scent that, if this kind of nose were an audible sound, would be as if you were standing backstage awaiting your cue to come out and make a grand entrance. Good and Plenty candy is exactly what WhistlePig 15 Year Rye smells like, and that’s a good thing.

Flavor
The first taste of this whiskey explodes on the tongue in a burst of herbal sweetness — dark honey, heaps of licorice, fennel, dill, and caraway seed, roasted oak, cinnamon, and dried citrus peel. Some say wheated whiskey is smoother and easier to enjoy, while rye is a stronger grain that provides a spicier kick. WhistlePig 15 Year Rye leans darker in flavor and is exceedingly herbal and oily. The smokiness of the rye is somewhat muted by the sweetness but comes through with a blast of pepper. Smokers may find this an appealing alternative to traditional foreign whiskies.

The “chewing” reveals somewhat herbal and distinctive “grape” tasting notes that are also reminiscent of berries and dried fruits such as cherries and cranberries. The rye’s typical sweetness lingers, but there are additional layers of sweetness to be found here, such as milk chocolate, honey, and the unique flavors that come from dripping the barrels: candied citrus peel and marshmallow you can feel on your palate.

The closer you get to the end, the better it gets. The aftertaste of WhistlePig 15 Year Rye starts with a burst of dark honey sweetness, backed by a huge wallop of licorice and fennel, with accents of oak and tannins on the tongue. Toothsome cinnamon and alcohol warmth lingers in the mouth.

Although the WhistlePig 15 Year Rye is a very good rye whiskey, it’s not for everyone. So what is an alternative to buy?

Evan Williams is one of the most iconic Bourbon brands on the market today. Even if you’re not much of a drinker, chances are you know someone who knows someone who likes a glass of Evan Williams from time to time (or perhaps at every holiday). It’s often found on tap and in bottles at your local watering hole — it’s undeniably “good stuff.”

The nose on Evan Williams 12 is rich, dark, and fragrant. The caramel notes are strong, a little toasted vanilla, baked apple, orange, dried cherry, licorice, and roasted oak. A bit of added pineapple adds a nice sweetness as well. There are also some hints of dry and grassy nuttiness mixed with dark chocolate.

You taste the flavors in this bourbon, swirling around your tongue and dancing through your mouth. Its rich, sweet, and robust character gives it its unique taste as no other bourbon can match it. The bold flavors include caramel, vanilla, chocolate, apple, orange, tobacco, nuttiness, oak roasted, cinnamon, and coffee ground. Dried cherry and licorice make an appearance as well.

The DC-based distillery that is the subject today, Joseph Magnus (a variation on the phrase “Magnus Dominus” which translates to Lord Great One), releases a batch of their signature whisky every year to the delight of their customers (and their profit margins). The whisky is available stateside in multiple markets, but I was able to sample Batch 13 on a whim.

My first impression of this whiskey was that it had a very dark and rich smell with notes of caramel, honey, dried dates, orange extract, vanilla, and candied ginger. Dried orange peel, toasted coconut, and oak give this cigar its distinct aroma.

The flavor is just insane. The smoke is loaded with coffee, dark chocolate, cinnamon, geranium, and orange peel. You can feel its age with abundant, but not overdone, oak and spice presence with cinnamon, nutmeg, clove, and coffee.

Manifest Rye uses organic rye grain grown by farmers within a hundred-mile radius of the distillery. Its uniqueness stems from its use of wheat which acts as a spicier grain and balances out the inherent sweetness which can appear in some rye whiskeys. Wheat is also very delicate and care needs to be taken during the distillation process to make sure it doesn’t burn or impart flavors that are not wanted.

Combine a mélange of floral and pine scents with a peppery kick and you get Manifest Rye. Give it a shot if you want something that surprises your tastebuds without sacrificing complexity. Pine, wood, lemon, and malty grain all come together for a pine forest in your glass.

The flavor is just as rich and bright as the aroma. There’s a mix of fruity flavors, with banana, orange, and pear into pine and botanicals. Vanilla, grain, and wood take the lead. A few food pairing ideas come to mind for this whiskey including Indian food, spiced dishes, and light fare. I don’t think it would pair well with heavy foods, like barbeque or red meat.

When it comes to whiskey, age is definitely an asset. But time isn’t the only thing that can maturation (definitely not a word) a whiskey. When you drink a WhistlePig 15-year-old Rye Whiskey, you can’t help but notice that the flavor profile has been masterfully crafted.

This whiskey has a lot of licorice and anise, fennel, and candy cane flavors. It’s also very herbal, vegetal, and even more medicinal than other ryes. It will be a perfect accompaniment to Christmas dinner or any other festive meal.

Is WhistlePig 15 Year Rye Worth the Money?

Most of the rye whiskey produced today comes from Canada and costs less than $40 on average. Noting this, WhistlePig 15 Year Rye has decided to set the bar high with a $100 price tag. But don’t you worry — it’s worth every penny!

How Much Is a Bottle of WhistlePig 15 Year Rye?

You might have heard about this liquor due to its high cost. The liquor-loving world has been all aflutter since the release of WhistlePig 15 year rye whiskey. A limited number of 60,000 bottles were available for purchase at $100.

Everyone knows that in a few years’ time most whiskey is going to go up in value, but WhistlePig 15 year rye really does increase in value. WhistlePig 15 Year Rye is a high-end whiskey for the most discerning of palates. Produced from 100% rye grain, aged in hand-selected white oak barrels. This may be more than you are used to paying but if you’re looking for something special, this is it.

WhistlePig 15 year rye whisky is one of the most interesting whiskies I have tried in a long time. It’s a dram of whiskey that is bold and powerful, yet refined and approachable — all at the same time. I’m here to tell you that WhistlePig is superior to the much-hyped Manifest Rye (batch 4).

WhistlePig is a 15-year-old rye whiskey which makes it perfect for drinking neat. This is because you get all the subtleties of this intense rye-ness and not mask it with ice or water. The only thing better is to drink this with a cube of ice to see just how intense the complexity of this alcohol is.